It is my great pleasure to inform you that you are one of a select number of hockey clubs across England to achieve England Hockey Clubmark accreditation.

Achieving England Hockey Clubmark is an important step in ensuring your club operates to a set of core criteria and has good practices in place to ensure that you can deliver quality hockey in a sustainable and vibrant club environment. 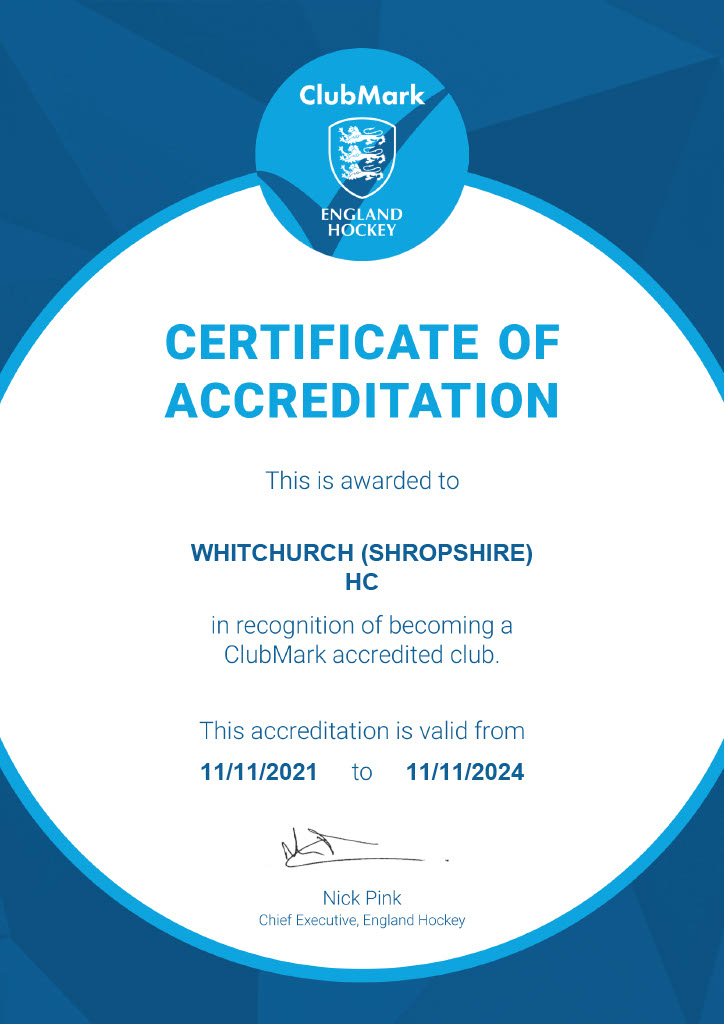 With a week off for all the teams for half term the ladies 2s and 3s caught up on previously postponed fixtures.

Whitchurch L2s got off to a good start in their game with a series of early attacks on the Wilmslow goal, the closest being saved off the line.

Whitchurch had almost all the possession in the first half with some lovely passing play around the middle between Molly Fry, Bella Morris and Lydia Jones and some good runs down the wings by Caitlin Edwards and Rachel Chesters.

After half time the game really was in Whitchurch’s hands. With a lot of attacks on the Wilmslow goal. Jasmine Williams commanded the right and was consistently able to stop Wilmslow from clearing the ball past her and was able to feed some beautiful passes to Molly Fry, Caitlin Edwards and Tracy Tolhurst, but unfortunately a goal was still to come. Louise Whitley was unlucky not to score at the back post from a pass across the dee despite her amazing dive!

Wilmslow gave Whitchurch a scare with a counter attack that saw four attackers against just Ball who put in some amazing tackles but was unable to completely stop their advance. Goalkeeper Gwyn Thomas-Rees came off her line though and intimidated the forward managing to stop an initial shot and then saved the second attempt with her stick from the ground which enabled Ball to sweep the ball away to safety.

The resulting short corner was a further concern for Whitchurch to deal with, fortunately Captain Emma Stubbs took one for the team and got her shoulder in the way of what would have been a very strong shot on goal.

This brief run against play seemed to rally Whitchurch and some great teamwork led to Molly Fry hitting a very determined shot that struck the back board with some venom three minutes before the final whistle. Molly Fry was awarded players player and Whitchurch earned themselves a very well deserved win.

Whitchurch 3s travels away to Runcorn with over half the team very new to senior hockey, the remaining four players carried plenty of experience with them.

Whitchurch won the toss and Lucy Chadwick took the first push back. Driving the ball into the oppositions half with speed and accuracy to Poppy Gilbert on the left.

For the first quarter of the match, Whitchurch’s inexperienced team held an extremely strong Runcorn attack. However, Runcorn broke through and whipped a fantastic ball in the air scoring in the top left hand corner, it was a seriously fantastic goal. But Whitchurch were not down heartened and kept the pressure on.

In the dying 10 minutes of the first half Runcorn were awarded a succession of short corners, forcing Whitchurch to bring Mable Hazelhurst in to defend her first ever shorts, which she did with great determination and speed.  In fact as a defensive team we were proud to not concede a single goal from short corner all match.

Despite our success rate being great for short corners, Runcorn attack allowed them to score a further four goals past Louise Cottrell in the first half.

After a rousing team talk by captain Cooper at half time and a box of jaffa cakes kindly donated by the opposition.  Whitchurch attacked Runcorn’s pushback with renewed enthusiasm.

From the off, sisters Lucy and Robyn Hearn fought hard on opposites sides of the pitch, to keep Whitchurch’s attack alive, with Heidi Carr being a nuisance to Runcorn’s attacking half, taking Runcorn by surprise. They well supported by Jess Hunt in mid-field.

Once Runcorn had regrouped they attacked with a vengeance, the halves of Jessica and Mabel valiantly protecting Whitchurch’s golden girls in Whitchurch last defence, Wendy Copper, Mel Reid and Emma Clarke.

Most of the play was in Whitchurch’s half of the pitch, Runcorn had shot upon shot at goal, which Whitchurch valiantly defended again and again over and over.  All the team just upped their game in the second half, marking players and supporting each other. Because the team gelled well and began to feel their positions Runcorn only managed to smash one goal in the second half.

Despite Whitchurch being defeated by Runcorn they played an extremely strong game even though the majority were very young and inexperienced, captain Cooper came away very proud of her team. Even the umpires and the Runcorn team commented on the strength and abilities of such young players.

Player of the match was given to Emma Clarke who totally deserved it, over GK Louise who didn’t get it as Emma is amazing and can’t understand why she has never been awarded this accolade before.

Through absence and injury throughout the club several players made their debuts for higher teams.

Ladies 1s played away against Macclesfield and from the off the ladies 1’s looked like they had the upper hand, with some great passing down the pitch between Molly Fry and Lisa Sullivan. However, an annoying goal from Macclesfield after 15 minutes knocked Whitchurch’s confidence.

Defence was the name of the game for Whitchurch for the rest of the first half, not long before half time Macclesfield got another goal from a deflected short corner.

Goalie Holly Edwards made some great saves as Macclesfield continued to attack.

After half time, Macclesfield got their third and final goal. This seemed to wake Whitchurch up and they got more break throughs. Hayleigh Busby and Amelie Morris worked well together on the left wing. Then, Sullivan fired a ball picking out Captain Cath Gresty in the dee who battled with the keeper to score a great first goal! The ball then stayed in Whitchurch’s possession with Jasmin Williams and Hermione Ball keeping the ball away from their dee on their debuts. After a run down the pitch, Ellie Pearson then scored their second goal. With the score now 3-2 Whitchurch fought for more. Chloe Lloyd worked tirelessly in defence playing the ball up to Holly Gilbert on the right wing. The team really came together in the final third and did a fantastic job at closing the gap between the scores.  At the whistle the final score was 3-2 as Whitchurch ran out of time.

Ellie Pearson was awarded player of the match by Macclesfield.

Whitchurch ladies 3’s – a team of over 200 years in defence and just about 50 in attack, with a number playing only their second game for the club and a number of debutants they faced an Alderley Edge team of older juniors and experienced seniors.

Alderley took full advantage of Whitchurch nerves and scored a high goal very early on quickly followed by a second. Whitchurch battled on with Ellie Windsor and Meg Brunyard working hard in the centre supported by Lily Harnden and Louise Whitley, but the Edge had it covered, and Whitchurch were unable to break through. Due to the brilliant work from the defence of Mel Reid, Emma Clarke, Jan Teggin and goalie Louise Cottrell it prevented Edge from scoring again before half time.

The second half was filled with stronger attempts from Whitchurch getting closer to the scoring area with Lucy Chadwick breaking through with pace but unable to find the backboards. Alderley Edge had to battle through Poppy Gilbert, Maisie Bennett and Eleanor Beecher who did a sterling job getting the ball from the Edge together with Hannah Wyke and Mabel Hazlehurst driving it up the pitch only to be stopped by the Alderley defence. Whitchurch battled from start to the end and gave everything. Led by captain Jan Teggin who with minutes to go was seen performing a well-rehearsed drop shoulder roll springing to her feet and chasing back.

It was a huge learning experience for the Whitchurch team, but they took many positives as they continued to improve throughout the game and never stopped working right up to the final whistle.

Huge thanks go to stand-in Captain Jan Teggin and Umpires Gary and Chris.

Whitchurch had most of the play in the first half, but when trying to hit out from free hits or 16s they were met with a wall of white and unfortunately this led to quick runs by fast forwards of Deeside. Whitchurch didn’t make it easy for them as Gayle Ladd,  Lydia Jones and Nicky Barber were powerhouses in the defence and Megan Nicholson was kept busy in goal saving shots as Deeside gathered forces, kept their sticks down & determination resulted in 2-0 lead to the home side at half time.

The second half started well with a swift run from Nina Hodges and Whitchurch thought they were back in the game but unfortunately it was disallowed after discussion between the umpires for a foot.
A quick breakaway goal from Deeside was followed up by smooth stick skills going round her defender by Sasha Preece in the dee and a quick cross to Poppy Huxley who knocked it past the goal keeper for a un-disputed goal making it 2-1. Heidi Carr and Bella Morris made lots of great runs getting the ball into the dee, but the Deeside defence was too strong. Whitchurch had most of the play in the second half and with good movement found gaps on from hit outs, resulting in several shots on goal saved by the keeper.
Deeside kept up their attack and scored two more goals before the final whistle finishing the game 4-1.
Deeside nominated players player as Nina Hodges it was well deserved as she worked very hard throughout. Well done to young players Freya Gresty and Lucy Hearn who got stuck in and were confident.  Everyone played amazingly and put in their best ‘well done’

Due to increased number of players wanting to attend training the club has decided to split training over two nights going forward.

You will need to sign up to Teamapp and register in advance of attending.

All the information for this can be found on the ‘Joining our club’ page of the website in the Welcome packs.