Whitchurch started off the stronger team with some great passing between Lydia Jones, Lucy Hearn, Poppy Gilbert and Sophie Jones but Crewe’s defence was solid and stopped the ball getting to Sue Read up front

Whitchurch controlled the attacking field and within the next few minutes Whitchurch scored with textbook play passing from Hayley Kellett to Heidi Carr to Phoebe Jones who crossed in the ball to Sophie Jones who elegantly slipped it past Crewe’s goalkeeper.

Crewe came back very determined, but Emma Stubbs, Freya Gresty and Rachael Chester’s fought back defending the goal. The ball was passed up the pitch to Maisie Bennett, Poppy Gilbert and to Sue Read who then drove the ball through defenders and made many attempts on goal. Whitchurch dropped their guard for a minute and Crewe saw an opportunity taking Whitchurch by surprise scoring an equaliser.

The second half started off pretty much the same as the first! There was some great passing from Lucy Hearn , Lydia Jones, Heidi Carr and Phoebe Jones but again Crewe’s defence kept Whitchurch out of the Dee . Crewe seemed very determined and had multiple short corners all saved by goalkeeper Phoebe Gregory and the Whitchurch defence. Hayley Kellett made an amazing run one on one with Crewe’s forward and managed to keep her from taking a shot. Unfortunately, just before the final whistle Crewe scored leaving Whitchurch were very disappointed but for positive next week’s game when the play Winnington park.

Whitchurch ladies 1s entertained demoted Golborne 1s this Saturday and certainly showed them what they were made of.

The game’s first half was fast and feisty, Whitchurch attaching hard, but Golborne had a lucky break and scored within 5 minutes.

Whitchurch quickly fought back with a run along base line from Captain Cath Gresty and a great deflection by Georgia Munro. Defensive players Chloe Lloyd and Hayleigh Busby cleared any other opportunities that Golborne had in the first half, passing out to Tilly James and Mollie Bell.

Whitchurch settled into a great game and held strong positions, swamping Golborne. Some great triangular movements up the pitch by Jaz Williams, Captain Cath and Lisa Sullivan gave Munro a touch again to take the lead at half time.

After the break Golborne started as they did in the first half, with a strong pass up into the dee for them to score a second.

There were plenty of runs up the pitch by Bell and Sullivan putting plenty of pressure on the Golborne defence. Winning a run of short corners Bell made one count to take the lead 3-2.

Whitchurch worked well together to cut out any breaks Golborne had. Hermione Ball sent the ball up to forwards Bella Morris and Munro and a skilful run for Munro got her a hattrick and gave Whitchurch a comfortable 4-2 lead.

Golborne didn’t give up but began to tire, but keeper Holly Edwards again showed her calmness as took on the Golborne attacker to make an amazing save.

With 5 minutes to go Whitchurch continued the pressure and played mainly in the Golborne 25, Jasmine Williams scored from open play a 5th and final goal for Whitchurch.

The ladies 3s received a walkover and 3 points after Alderley Edge failed to raise a team. The ladies 3s are now hoping for a regular run of matches up to the Christmas break.

Whitchurch returned to play after an extended break from half-term and a team withdrawing to play local rivals Deeside, and were frustrated not to come away with all three points after a strong start to a game which they dominated for large periods. The Reds began well, moving the ball around and making decent runs for each other, and the pressure paid off, with Luke Beddow’s persistence ensuring the scramble in front of the goal ended in his favour with a good shot through the keeper.

A second goal followed a few moments later as George Latham took the ball around their keeper for the second, and the momentum was fully with the Reds. The Deeside keeper was keeping them in the game, making several fine saves, but Whitchurch were working well as a team. Deeside did finally get a break, picking up a short-corner for a foot in the dee, and converting with a fine waist-high flick over Paul “Sturge” Leigh’s diving save.

Going into the break 2-1 up was a fair reflection of the first half. Captain Jack Barnes picked up the Reds’ third goal from a well-worked short-corner, but Deeside were getting short-corners of their own at the other end, and were converting them successfully to bring the scores level. Beddow continued to show his strong development with some excellent work at the back post from another Whitchurch short-corner, deflecting in the wide pass from Barnes to pick up his second and the Reds’ fourth, but a lack of composure late on in the second half meant that Whitchurch kept giving the ball away, making unnecessary passes, running into trouble and eventually it paid for Deeside, who picked up their fourth short-corner goal to level the scores at the final whistle.

A frustrating day, with plenty of excellent work undone by a drop in concentration and composure in the final minutes of the game meaning that the spoils were shared on a day that Whitchurch could have forged ahead in the league. They go again next week at home against Alderley Edge

Brabo are offering the opportunity to sponsor players.

If you are interested complete the below form. Under 18s will need parental permission.

This is open to all players and abilities 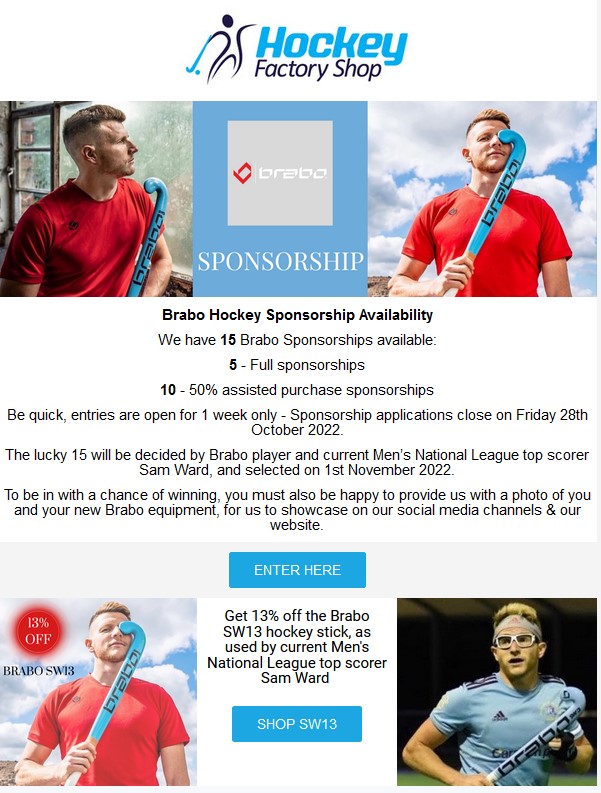 Unfortunately due to a shortage of coaching availability this week we have had to cancel the Wednesday training on 19th.

Training will be back on the following week.

Whitchurch ladies 1s travelled away to Alderley Edge to play their ladies 4s team. With a game plan in mind of keeping possession the ladies began the match strong, passing between their midfield players. Alderley Edge then fought back with a few quick attacks, dealt with beautifully by Whitchurch defence, Holly Edwards, Hermione Ball, Hayleigh Busby and in particular Chloe Lloyd who had a great game at centre back.

From a break in defence Whitchurch passed it up the pitch, allowing Poppy Huxley to make a dynamic run into the dee and slot the ball past the keeper to get them their first goal. With Whitchurch gaining confidence, Lisa Sullivan made a run through the opposition defence into the dee to hit the ball at goal which took a lucky deflection over the keepers head. A further 2 goals then came from amazing shots taken in the dee by Hayley Kellet after some great linking passes between Mollie Bell, Jasmin Williams and Bella Morris. Being 4-0 up at half time

Whitchurch relaxed somewhat in the second half allowing Edge to gain some momentum in their attacks. However, Megan Nicholson confidently dealt with any shots her way keeping a clean sheet for Whitchurch.

A confident win for the ladies 1s who look forward to having their captain back for their next game in 2 weeks’ time.

A positive start for Whitchurch Ladies 2’s, who faced a much stronger and more experienced team in Sandbach Ladies 1s. Recently relegated from a higher division last year, Sandbach Ladies 1s are currently sitting at the top of the league. Excellent defence from Gayle Ladd and Captain Emma Stubbs meant the visitors were kept at bay for most of the first half.

However, as time went on Whitchurch Ladies 2s were outplayed by the much older Sandbach team. Keeper Phoebe Gregory was under immense pressure and the 8-1 score doesn’t really reflect how well she played, as she saved many more goal attempts throughout the match. The ladies didn’t let their spirits drop and continued playing hard; tackling and driving the ball down the pitch wherever they could throughout the match. A series of short corners with strong organisation, meant a consolation goal from Lydia Jones boosted the team morale and gave them hope for their next match against Crewe 3’s on 29th October 2022.

Poppy Gilbert was given the well-deserved players player